The Big Hamersma reviewed quite a few of our wines as super good and they are now available in a discount box.

The big Hamersma (famous Dutch wine critic) has rated a whole range of our wines with an 8+ to a 9- (out of 10). And because we are so proud of these reports, we now have six of these wines together in one box so that you can taste them all as well.

• 1x Medea Malvazija 8+. Local malvasia. Member of a widely available grape family that has gained solid ground from Greece in Italy, Spain and therefore also in Croatia. Also has a nice trip in store for the taste buds. Dried white fruit and mandarin. Peach and honey. A splash of rosemary and laid back acidity.

• 1x Orahovica Graševina Vrhunsko 8.5. A grape that is common in Croatia. Grasevina, loosely translated 'green pea' in the vernacular. Elsewhere they also know it as the olaszrizling or Welschriesling. Surprisingly, nothing to do with the riesling. In the hands of a good winemaker it gives a fresh white, with soft apple, pear, nutty, some minerality and careful acidity. Also often used to make sweet. But don't worry, this one is dry with a juicy bitterness.

• 1x Vina Caric Bogdanjuša 8.5. Own grapes first. Local hero who is also so ignorant that he does not get further than the island of Hvar. Thanks to the Greeks who already founded a colony there around 400 BC, Pharos (Hvar). Anyway, they never traveled without vines in hand luggage at the time. Centuries later, we still benefit from this 'godsend', which loosely translated bogdanjusa means.
And what does God give us then? Juicy, loose-dry white, dried white fruit, a pinch of anise, marmalade bitters. Was labeled the 'Super cheese wine' by our own cheese queen Betty Koster van l'Amuse. Because it combines so incredibly well with Manchego, Brie and other blue cheeses. Wasn't available on the test table but we will certainly give it a try. We have faith in what Betty serves.

• 1x PZ Svirče Plavac 8.5. Plavac Mali. Read more about it at Vina Skaramuca, who has made a heavy transport version of the same grape. However, it can be even more colossal. The grape can naturally score up to 17 percent. However, PZ Svirce has not opted for that. They have managed to tame it to a less liver-threatening 12.5 percent, let's say: a bit of a Beaujolais approach. Does he also have something to do in this capacity. Nice juicy dark fruit, a bit firmer, a bit more tannic. Also, some of that brash earthiness, cheerfulness, and an attempt at jubilation.

• 1x Skaramuča Dingač 8.5. Fifteen percent. Plavac mali does not do it for less. Plavac mali, loosely translated the little (mali) blue (plavo). Small grape with a lot of skin. This also makes a significant impact on the tannin trajectory. Seems to be close relatives of the primitivo and the zinfandel, grapes that don't like their light-footedness either. Dark blackberries from the shade tree forest. Dried blue plums. Currants. Vanilla stumps. Almost powdery solids. Stands like a Croatian mountain village.

• 1x Feravino Miraz Frankovka 9-. Miraz means 'dowry'. And Frankovka is the Croatian alias of blaufränkisch. Also 'Slavonija'. please don't confuse with Slovenia: that's a country. Here we are dealing with a region in Croatia, where popular oaks also come from. In the north of Italy, they sometimes have a knack for using this type of wood to raise their red. In short, wine with a story. Although most of that has already been said. After the test findings. Ripe plums, plump cherries, mild peppers, cinnamon, and the sweetness of roasted peppers. Sultry, round, filled, ripe but also fresh, coquettish, and lively. I may be wrong: but I detect quite a few oak influences. I have a hunch where that comes from.

Add your review
0 stars based on 0 reviews 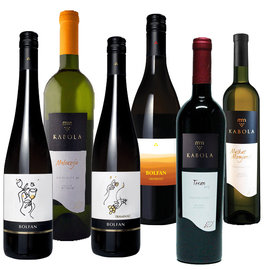